In 1983, the New Code of Canon Law was a milestone for involvement of lay people in the Diocesan Tribunals of the Church. This work concerning mostly marriage annulments, was formerly restricted to priests. The new Code decreed that one of these Defenders of the Bond and Judges could be a qualified lay person. Normally, three persons judge a Petition for a Declaration of nullifying marriages. Sisters facilitated this lay canonical involvement in Diocesan Tribunals. Many Religious Congregations, then revising Constitutions, had Sisters studying Canon Law. The Sisters of Notre Dame de Namur (SNDdeN) joined the forefront of this apostolate. Then in 2015, Pope Francis issued a document, Mitis Iudex, decreeing that in the panel of three Judges, two could be qualified lay people. This was a major step forward.

My arrival on the Canon Law scene began in 1977 with a placement at Westminster Metropolitan Tribunal while working on my diploma in pastoral theology, including a course on Canon Law. Previously, I taught for 18 years and spent three years full-time as member of the Movement for a Better World. With my administrative work, I learned how to be an advocate in a marriage case. Then I continued as a full-time advocate for two years until I received a doctorate at St. Paul’s Pontifical University, Ottawa, Canada in January 1984, under the direction of the late Father Frank Morrisey, O.M.I. My original intention to stay for a year changed when I soon realised that having better qualifications would help other women to serve the Church in the Marriage Tribunals. In February 1984, Sister Enid Williamson, a Servite Sister and I were appointed in Westminster as Britain’s first lay Judges. This was the beginning of a new SNDdeN apostolate. Having joined in 1978 the Canon Law Society of Great Britain and Ireland, I attended the annual conferences. For those years, Sister Enid and I were the only two women present. The Canon Law Society, just as the Westminster Tribunal and other tribunals, welcomed, respected and appreciated our participation.

Now, for over 40 years, I have been involved with marriage cases in England, Scotland, Wales and Northern Ireland, even in retirement. Over the years, I have been a Judge, a Defender of the Bond and an auditor (interviewer). I have served in the establishment of tribunals, training of auditors and have given talks on canonical matters. My work has been mostly with marriages. I have facilitated also General Chapters and meetings of men and women religious and I am available for consultation on canonical issues.

Ministry is centred on the love and healing of Jesus Christ

Before becoming interested in Canon Law, I taught Latin and Classical Civilisation in three Notre Dame high schools in England, ending as a Senior Teacher in 1989 in St. Julie’s High School, Woolton, Liverpool. As an only child, I cared at home for my mother, coping with dementia. Unable to manage doing this alone, our British Provincial Team made a place for my mother in our SNDdeN health care facility. So grateful to them, I visited as often as possible, while following a two-year Theology course with the Dominicans in Oxford where I followed a module on Canon Law. Aware that Sr. Ishbel was working in that field, I asked to follow in her footsteps and I received permission. After gaining the qualifications necessary also in St. Paul’s, Ottawa, Canada, I began my ministry in Westminster where Sr. Ishbel had paved the way. I have worked as a Judge and Defender since 1997, except for six years serving on our SNDdeN Congregational Leadership Team. As a religious and a canonist, I have often helped other Religious Congregations with Canon Law issues.

Like Sr. Ishbel, I have worked for several of the Diocesan Tribunals in England and in Northern Ireland. I continue to do so from home, during these COVID-19 pandemic lockdowns. I give talks and serve on the Vicar for Religious Team in the Archdiocese of Westminster. Active in the Canon Law Society of Great Britain and Ireland, I am the first woman to be the Secretary. Sr. Ishbel became the first woman life member some years ago: Attending my first Annual Conference, I realized that there were fewer than ten women canonists among 100 priests. Now, twenty-five years later, there are now as many lay men and women as priests.

The apostolate of the canonist is always one of compassion, attempting to bring justice and peace to someone who is suffering. For canonists, this ministry is centred on the love and healing of Jesus Christ – a real a privilege. Helping people whose marriages have broken down is a delicate and extremely confidential ministry. The Judge determines if true consent was given to the union or not because of psychological deficiencies or faulty intentions. Many tears are shed when an applicant speaks of the situation! Amazingly, the experience has often been a consoling and healing one for many. Lay people and priests on a panel of Judges brings a balance and deeper insights into decisions made. Many lay people contribute to the apostolate of the Diocesan Tribunals by taking evidence for the cases. Most do this at their own expense, some using distance learning Centres. 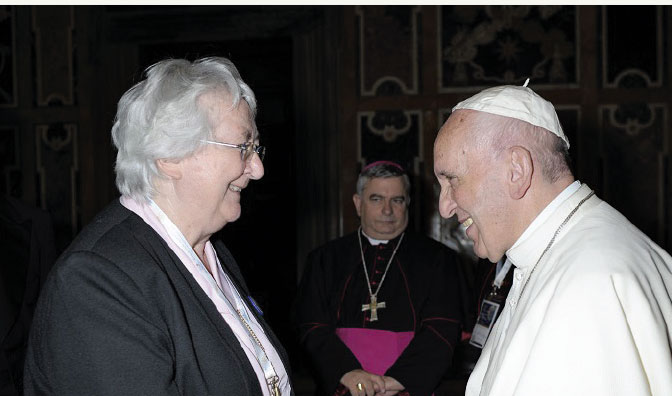 In Rome, Pope Francis greets Sr. Rachel and expresses gratitude for the Mission of the Sisters of Notre Dame de Namur internationally, including the ministry of Sister Canonists.

In 2015, Pope Francis made it possible for two qualified lay people to be among the three Judges on a marriage nullity case. He also allowed a Petitioner to introduce a case in the Diocese where he/she was living. Previously, a Petitioner had to apply to the Diocese where the marriage had taken place or where the Respondent was resident. Large numbers of immigrants in the UK, instead of applying to their home dioceses, go to the Diocese where they live now. In London, cases are increasing involving people from USA, Canada, Australia, New Zealand, the Philippines, Japan, and many countries in Africa and South America. Many cases involve always people from Poland, Italy, Spain and Portugal in a ministry “wide as the world.”

Another apostolic aspect of tribunal work for personnel is dealing with non-Catholics. When a previously married and divorced member of another faith or none wants to marry a Catholic, their former marriage has to be examined to determine whether they are free to marry in the Catholic Church. This is a sensitive area of the tribunal service and extremely rare that applicants have any complaints about the way in which their application was handled. Some are so impressed by the seriousness with which the Catholic Church treats marriage that they are moved to seek instruction.

The Catholic Church in the United Kingdom and beyond values Sisters Ishbel and Rachel. As women, they have insights which even the most intuitive clergy can never have – a gift recognised even by their clerical male colleagues. These Sisters recognize and comprehend the emotional trauma which inhibits some female Petitioners from expressing themselves clearly. The renowned efficiency of these two Sisters is a cause for amazement and some amusement in their expertise in managing so many cases all at once. They reach out promptly, with immediacy to people so that there is no delay in resolving marriage cases. Although stories of participants in marriage breakdown are often heart-rending, Sisters Ishbel and Rachel know that their ministry enables a future marriage in the Church and a possible happy ending in a return to the Sacraments.